It is just past 7:00 in the morning.  The sun is slowly rising above the horizon and warming the hundred or so people I find myself with.  Marijuana smoke hangs in the early morning air and finds its' way into my lungs.  I am alone among strangers but surrounded by friends.

Iconic Canadian band, The Tragically Hip are coming to my small hometown of Cobourg to perform a concert.  No one here knows why they have chosen our little community centre to play at but, they have and that's all that matters. That, and the fact that tickets go on sale in a few hours.  Everyone is here, it seems.  Some have camped out overnight.  Everyone clutches their Timmies double-doubles. Music fills the air.  Smiles abound.  I haven't even had breakfast yet.  But I have had my double-double.

It is in this scene of Canadiana gone wild that I take out my iPod and begin to type my entry for this weekend's Trifextra challenge. Super heroes come in all shapes, sizes and formats.  I have chosen to pull my subject, not from the world of animation or cartoon but, from the golden age of cinema. 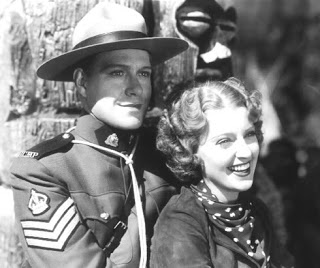 Hollywood has a way of romanticizing reality.  One of the most famous Canadian examples of this came from the mythologizing of Royal Canadian Mounted Police officers in the movie, Rose Marie, starring Nelson Eddy and Jeanette MacDonald.

In their circles,
tears of the First Peoples,
sparkled against their red skin
in the glow of dying embers.

I am a firm supporter of the men and women who serve in our police forces and armed forces.  That they risk their lives to keep me and my family safe does not go unnoticed or unappreciated.  However, sometimes, as in the case of the Nelson Eddy movies, being heroic comes at a cost to others.  In Canada, as in the U.S., westward expansion was achieved at the cost of uprooting First Nations Peoples from their land and destroying a way of life that had existed for centuries.  It used to be a source of national pride that Nelson Eddy and the RCMP "always got their man."  However, with the passing of time, many countries, including my own, have taken a more reflective look at history and the cost of nation-building.  First Nations culture is now being celebrated and respected to a greater extent in Canada than ever before.  But, if you were to ask my 81 year old mother about seeing Nelson Eddy and Jeanette MacDonald as a young girl, her eyes would light up and she would say that he was a true Canadian hero.   To her, he was.

On a closing note, here is The Tragically Hip and a most appropriate song for this esteemed group of writers, Poets.  ***Note, there is a brief bit of nudity in the crowd, if that matters to you.  Also, lead singer, Gord Downie, is a bit "out there" sometimes on stage.  But, I love the Hip.  O' Canada!

"Don't tell me how the universe is altered
When you find out it's the writers who get laid."     Now, there is a great lyric!  :)