I received an email today from a good friend. That email contained a link to her latest blog post. On her blog post was a link to my website.  Being the ever-curious chap that I am, I clicked on my own link and was whisked away to my own blog site. The first thing that caught my eye was the date at the top of the screen.  The date read, May 12, 2014.

Nine weeks of my life have elapsed since my last post.  Nine weeks!   63 days without creating anything that required the pushing of a "publish" button to complete it. Nine weeks away from all of you.   I haven't read much of anyone's work, proffered up many comments nor have I entered any challenges on anyone's pet projects or recommended sites.   I have been idle......at least where The Writer's Life is concerned.

But, I have been, anything but, idle when it comes to my real life.  My real life has been intensely busy and filled with dramatic moments by the score.  Emotional ends and anxiety-filled new beginnings characterize much of my past 63 days.  The demands of the human heart have consumed my waking hours and have trumped my creative desires.

The tipping point for it all came on May 13th.......one day after my final published post.  It came in the form of a phone call from my mother in Nova Scotia; a phone call whose impact I am only just emerging from, lo, these nine weeks later.

My mother was born in 1931 in Sydney, Nova Scotia.  She was the second-youngest of thirteen children.  Growing up in such a large family during the heart of the Great Depression and the Second World War, my mother knew plenty about hard times and going without the kinds of things that today's teenagers would take for granted.  Imagine being happy to receive an orange for Christmas!   She was.

Like many people of her era, my mother developed a hardy work-ethic and it came as no surprise to anyone that she completed her high school education and enrolled in courses that enabled her to become a registered nurse.  During her nurse's training, she met my father and, shortly thereafter, they got married and moved a short distance down the highway to Glace Bay, Nova Scotia.    My mother became a resident of Glace Bay in 1952 and remained so, until the phone rang in my house that May 13th afternoon.

Like many elderly citizens, my mother had seen a decline in the physical state of her health after she turned 80 years of age.  She had suffered three slips and falls within an 18 month time span and, along with the physical set-backs that such incidents cause, she began to lose her sense of confidence in her ability to live independently in her own home.  Being someone who had spent her entire career working in the Health industry, my mother knew, full well, that the journey from one's own home to a nursing home or retirement residence is, almost always, a one-way journey, ending in death.  So, she was in no hurry to move.

However, sometimes, unforeseen events play a role in refocussing contentious issues.  In this case, Mother Nature dealt my mother a cruel blow in the form of the great Ice Storm of 2013.  As many of you may know, from firsthand experience or from news reports, much of the eastern seaboard of North America, along with many parts of central Canada and the U.S. suffered through a series of devastating ice and snow storms last winter.  The damage to property and to roads and telephone lines was extensive.  Nova Scotia was not spared the wrath of these storms and, as a result, my mother found it increasingly difficult to safely leave her home; sometimes, for weeks on end.

Therefore, without too much pressure from my sister or from me, my mother came to her own conclusion that it was not realistic to try to cope with another winter like the one we had. So, during my Christmas visit, we discussed the various options she had with regard to assisted living retirement homes. To my great relief, she applied to a reputable retirement home, in her birth town of Sydney.  We arranged for a visit and saw that the Home was modern and well run.  The director of the Home said that my mother would be put on a waiting list and would be notified whenever an apartment became available for her.

When the phone rang on that May 13th afternoon, it was my mother.  She said that she had gotten the call from the Home and that she needed to be ready to move in two weeks!!!!

Being a teacher, I always have my summers off (unless I am taking an upgrading course).  So, when my mother had applied to move to this Home, my ideal scenario was that it would happen during the summer months so that I could go down and help her pack up her possessions in a leisurely fashion.
But, as a nasty winter of storms spurred my mother into a life-changing decision, her phone call changed all of my plans, too.  Suddenly, there was 60 years of life to sort through, pack up, discard, sell and almost no time to do it.  Luckily, my sister was able to go down the very next week.  She helped my mother clean out her closets, cupboards and attic spaces.  That was a huge help.

While she was doing that, I was working feverishly to get as much of my final report cards completed as possible before I left. Then, I booked a week off of school, just as we were preparing to start our final month of the school year (which is always the busiest month of the school year).  To get ready to be away, I had to prepare a full week's worth of work, with detailed plans for the substitute teacher to follow.   All the while, I was talking to my mother and sister almost every day to prepare for the move.

I flew down to Glace Bay on the 28th of May and stayed there until the 3rd of June.

There was still much to do to help pack whatever my sister had been unable to pack. It was depressing to see my mother's good china dishes gone and the majority of her vast china doll collection, too.  Sometimes, things are just things but, at other times, they help define a person and become synonymous with their identity.  In Glace Bay, my mother was known by many people as "The Doll Lady".  She was always willing to take her doll collection into retirement homes and allow those with Alzheimer's disease to have the tactile sensation of holding their babies again.  But now, these dolls were gone.  Sold to a scavenging collector for pennies.  Her good dishes, too.  How many meals were served on those Blossom Time dishes over the years at family gatherings?  Now, her china cabinet stood empty.

Although the house was still jammed with boxes and bags and bins, the decay was evident everywhere I looked.   My mother was still sitting there but, this wasn't her life anymore.  Events beyond her control were dictating the terms of her existence now.  It was her house but, it wasn't home anymore.

From a logistical point of view, the move went flawlessly and by the afternoon of June 1st, my 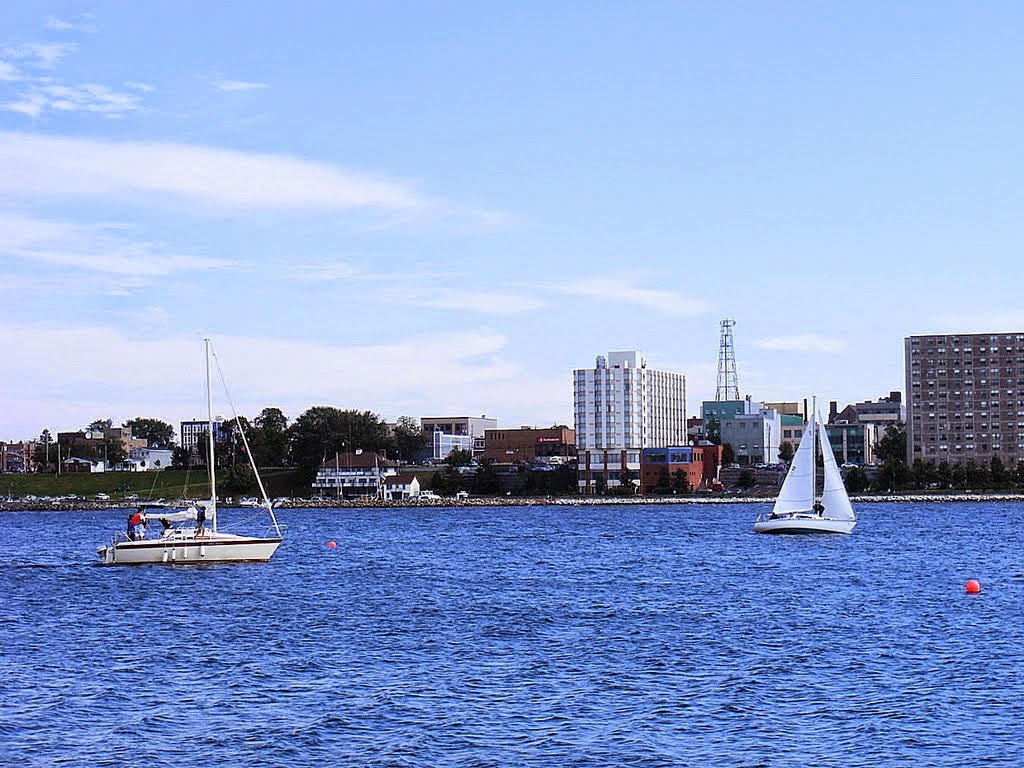 mother was securely established in her new apartment in the senior's assisted living residence in Sydney.   She has a small kitchen of her own plus, a living room, bedroom and full bathroom, too.  The window in her living room overlooks Sydney harbour which, from a real estate point of view, is a million dollar view.  However, the view she is most pleased about is how much clearer the television reception seems to be in Sydney, as compared to what it was in Glace Bay, a lifetime ago.

When I said good bye to my mother that June 1st evening, I had no home to go to for the first time in my life.  The house my mother had lived in and made so warm by her presence, was now empty.  We had turned in the keys so I couldn't have even slept on the floor in a sleeping bag. So, I rented a hotel room and looked out of my window which had a million dollar view of Sydney harbour as well.

I was born and raised by my mother in Glace Bay.  My view out of the window of her house was always the Atlantic Ocean.  I was married in Glace Bay, as well.   When I tell people where I am from, I always say that I am from the Bay!  Up until this past May, "going home" always meant a certain thing  and now, it means something completely different. I am not sure what it means, really. 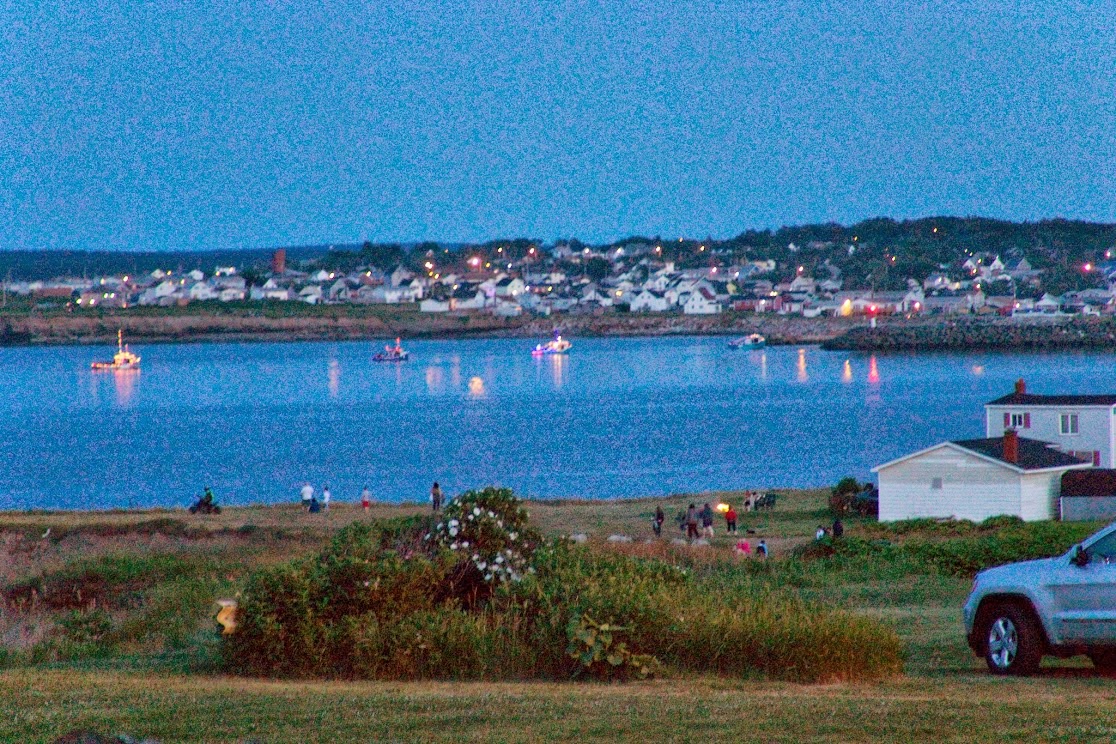 After all, what does "home" mean?  Is it where your family is?  Is it where your memories are?  Is it your physical house and yard and street?   Is home where my mother is?  Is she "my home"?  Or, is Glace Bay my home, even though she is no longer there?   *(Glace Bay harbour to the left. Sydney harbour, above).

In a few weeks, my wife and two daughters are coming with me to see Nanna's new "home".  We are staying in a hotel for five days.  There is a pool with a water slide.  My girls are excited about that. Will they be as excited to visit my mother as they used to be when they could play on her back deck and run around her big yard?  Will they bore quickly and not want to see their Nanna for very long?  It is all possible.  I am hopeful that being with my mother/their Nanna will still feel like being home again.  I guess that only time will tell.   I will keep you informed.

PS:   As the drama involved in this life change played itself out, I was not out from under the heavy hand of stress just yet.  For as I returned back to my family in Cobourg, I did so with the knowledge that my school was closing its' doors for the final time and that we only had the month of June left.  I will tell you all how that turned out in a follow-up post.

Thank you for your patience and for your continued support during my absence.  You are all wonderful people.   In fact, if it were not for the lovely e-mail (about her blog post) that I received from Laura this morning, I may not have found the impetus to screw up my courage and force myself to share my tale, as I have begun to do.  I have been away but, slowly and surely, I am coming home.