Grant Sine Public School in Cobourg, Ontario has been my professional home for the past eight years.   It has served the community located in the north end corner of Cobourg since it opened in 1965.   At the time, Grant Sine P.S. was a school that accepted students from Kindergarten (aged 4), all the way to Grade 8 (aged 13-14).  It was named in honour of Mr. Grant Sine who was a teacher, principal and later, a superintendent of schools for our area.  It's enrollment on opening day of school in 1965 was 268 students. 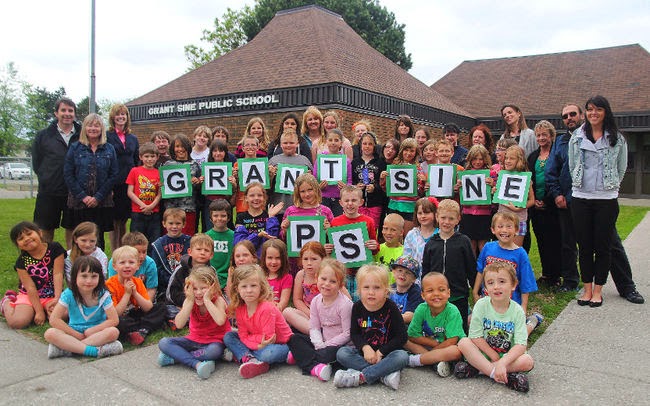 Grant Sine P.S. officially closed its' doors this past June.  Pictured to the left is our entire student body (49 students) and all teaching and support staff (13 adults).  *I am on the far left, in shorts, because it was hot and because I forgot about this photo being scheduled. This photo was taken in the midst of my preparations for going back to Nova Scotia to help my mother move out of her home of 60+ years and into a retirement home.  I wrote about that experience here.
If you were sitting beside me now, I would tell you the names of every single student in this photo and a dozen different things that made them unique and special.  I could tell you about each staff member and give endless examples that would demonstrate the enormity of their hearts and minds.   Being here for the past eight years, with these kids, their families and my colleagues, has changed who I am and how I view my job.  I would not have traded my experience here for anything.  I am saddened to have seen it all end.

This is how it all ended.


School years tend to be cyclical or rhythmic in nature.   Summers end, building toward the excitement of opening day.  The Autumn harvest marks the first great period of prolonged student work, culminating in the first report cards being issued.  The excitement of Christmas in December leads into the long, cold Canadian winter, lots of substantial indoor student work and a second report card.  In late winter, Principals begin the process of staffing their schools for the following year.  Teachers indicate their desired job placement for the upcoming year. Spring arrives and school activities tend to gravitate outdoors. Final tests, exams and report cards are written. End of the year school trips are taken.  Students are divided into new classes for the Fall. Everyone looks forward to summer vacation again.  The entire process that unfolds throughout a school year is fuelled by a sense of optimism or a sense of building toward something bigger and better than what was just left behind.  It is growth; achieved in the knowledge that continuity can be expected and will be safely delivered.

This year, our school year at Grant Sine P.S. was not like that.  It was slow death, right from the opening day of the school year.  The children arrived, not full of nervous excitement for what the year and their teacher might bring but, instead, with questions about what was going to happen to them when the school closed.

As I have written in previous posts, here, here and, again, here.....Grant Sine P.S. was not what one would consider to be a "typical" school.  Our student body, coming almost entirely from a social assistance housing development, experience a distorted form of childhood, surrounded by mental illness, addiction, violence, malnutrition and neglect.  Having a sense of control over their lives was never something that any of our students took for granted.  On many days, it fell to them to get themselves dressed, fed and to school on time due to the adult in their house being unwilling or unable to provide even a modicum of reasonable parental care to start off their day.   The steady rate of attendance by our students was a minor miracle and spoke to the value they placed on coming to school each day; not just to learn but, to be cared for and accepted for who they were and treated with kindness and positive attention.  The school was their harbour in the tempest that was their lives.

And now, it was being taken away from them.  None of them seemed surprised that they were never asked if it was ok.

I arrived back, from Nova Scotia, for the final three weeks of the year.  Needless to say, the closer we came to the end, the more emotional the students became; especially, the older students in the school. They had a better appreciation for what they were losing and had a better idea of the obstacles they would face at their new, much larger school in the Fall.  There were many outbursts of tears and of anger.  Their willingness to buy into the importance of trying their best with regard to their school work, deteriorated. The noise level of the school increased.   Behavioural issues mushroomed.

The hardest pill to swallow during this final month was the "School Celebration" that was mandated by the School Board for schools that are closing their doors.  There are by-laws that state that school communities are to hold a special day to honour the achievements and history of their school before the end of the final year of a school's operation.  However, the feeling in our community was best expressed by one of my parents early in the school year.  She said, "This is not a celebration. It is a loss.  Don't they realize what a loss this is to our community.  I am sad about this".  That Mom broke down in tears and sobbed uncontrollably.    The mood was one of grief but, there we all were, putting on a happy face for members of the Sine Family, all of the Principals of the school who were still alive, Board Office officials, including our Director of Education, and so on. 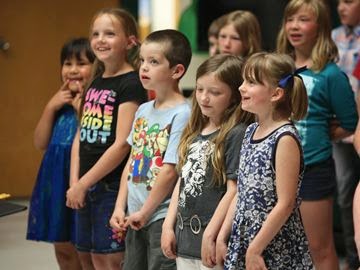 We managed to get the kids to perform one song for the crowd of on-lookers who had gathered.  Among those who had come was my father-in-law, who was a member of the very first graduating class at Grant Sine P.S. in 1965.  As much as the event was a success in terms of the number of alumni and other interested parties who turned out to pay their respects, it remained a bittersweet exercise for the rest of us. 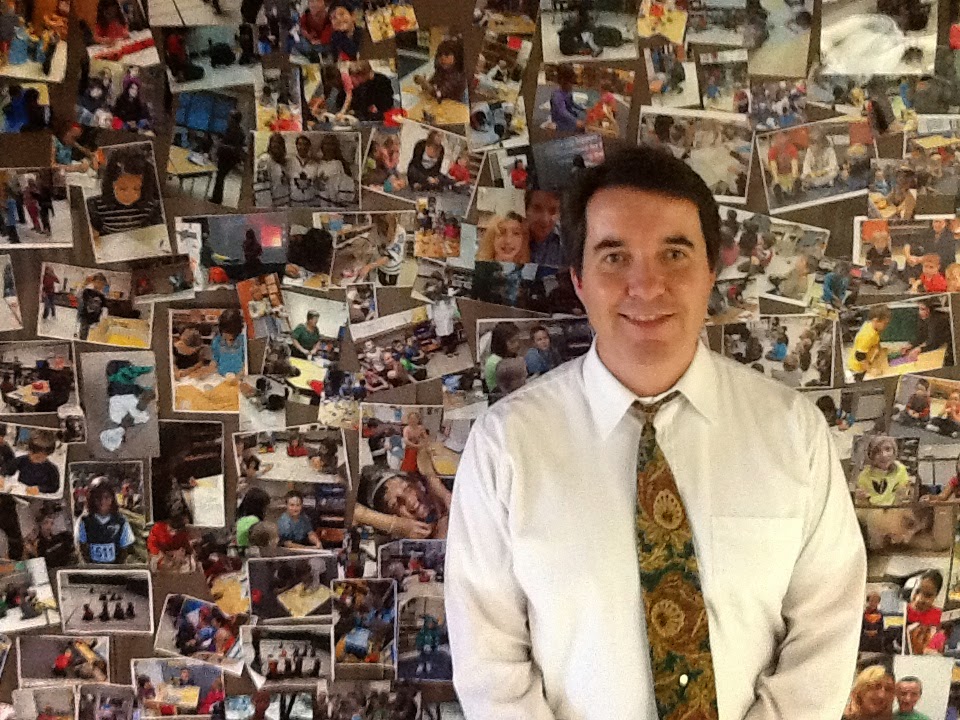 At our school, we always made a great effort to reinforce the idea with the kids that they were important and that they had worth, just because they were themselves.  We celebrated them, as fellow human beings, in many ways but, one of the most symbolic was by displaying photos of them all throughout the year.  In this photo, taken ironically enough, on School Celebration Day by my Father-in-Law, I am standing in front of a giant bulletin board that stretched from floor to ceiling and spanned four meters, easily.  It was festooned with pictures of the kids and staff, doing what ever it was that we did that made us smile and feel good about ourselves.  When my In-laws asked me where I wanted to be photographed, I chose that bulletin board because it best represented what our school was about and what had the highest value in our hearts and minds:  the people who came together here every day.  Us. Me. The kids. Everyone.

I look at this picture and am filled with an ache in my heart because, as much as I remember the moment this photo was taken, I, also, remember the second-last day of the school year when we took all of the photos down and the whole hallway emptied of our spirit and became a mere building again.

On the final day of school, we gave each student the chance to select a school sports jersey to keep.  Normally, the cycle of a school year being what it is, teachers are scrambling around to ensure that all of the jerseys are accounted for in preparation for the upcoming school year and all of the sports teams that will require those shirts.  But, no one required a team shirt for this upcoming year at Grant Sine. So, everyone got to keep one.  On that final day, the whole of the student body were clad in green and white, with the crest of the Grant Sine Gryphon, on the front.   Then we gathered up everyone's backpacks, books, indoor shoes and other personal possessions and, as a school, walked outside together into the warm summer sunshine.

That was how it ended.

Quietly.  Orderly.  Resigned to their circumstances.

Slowly, the kids and their parents drifted across the school yard and back to their homes. We turned and ordered Chinese food and shared one last meal together as a staff.  Then we completely cleaned out our classrooms and left the school, too.

Quietly.  Orderly. Resigned to our circumstances, as well.


But, when I reflect back upon how it all ended, there is one moment that I remember best.  I took my class on a trip downtown. 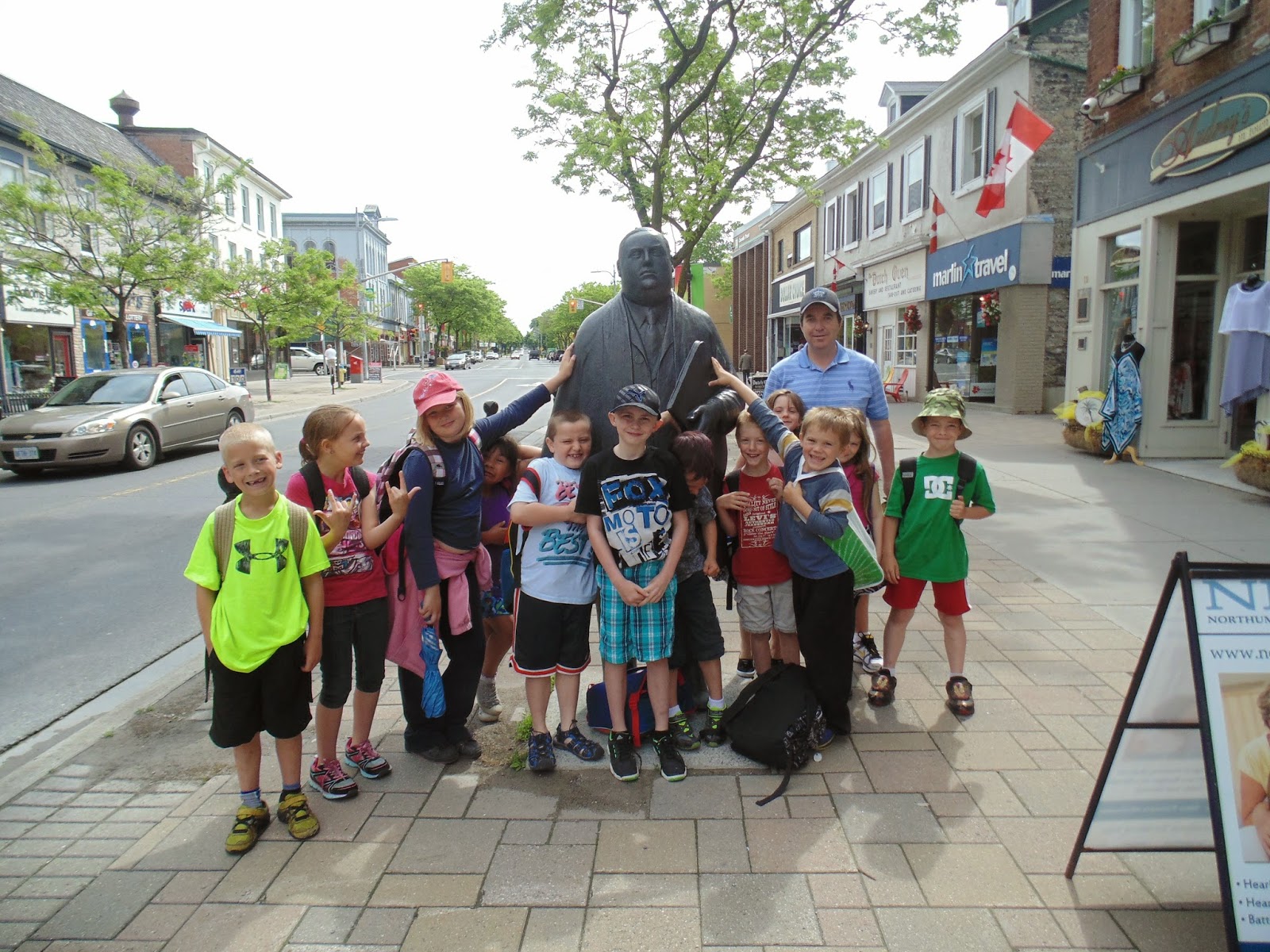 We had breakfast together at a local restaurant. 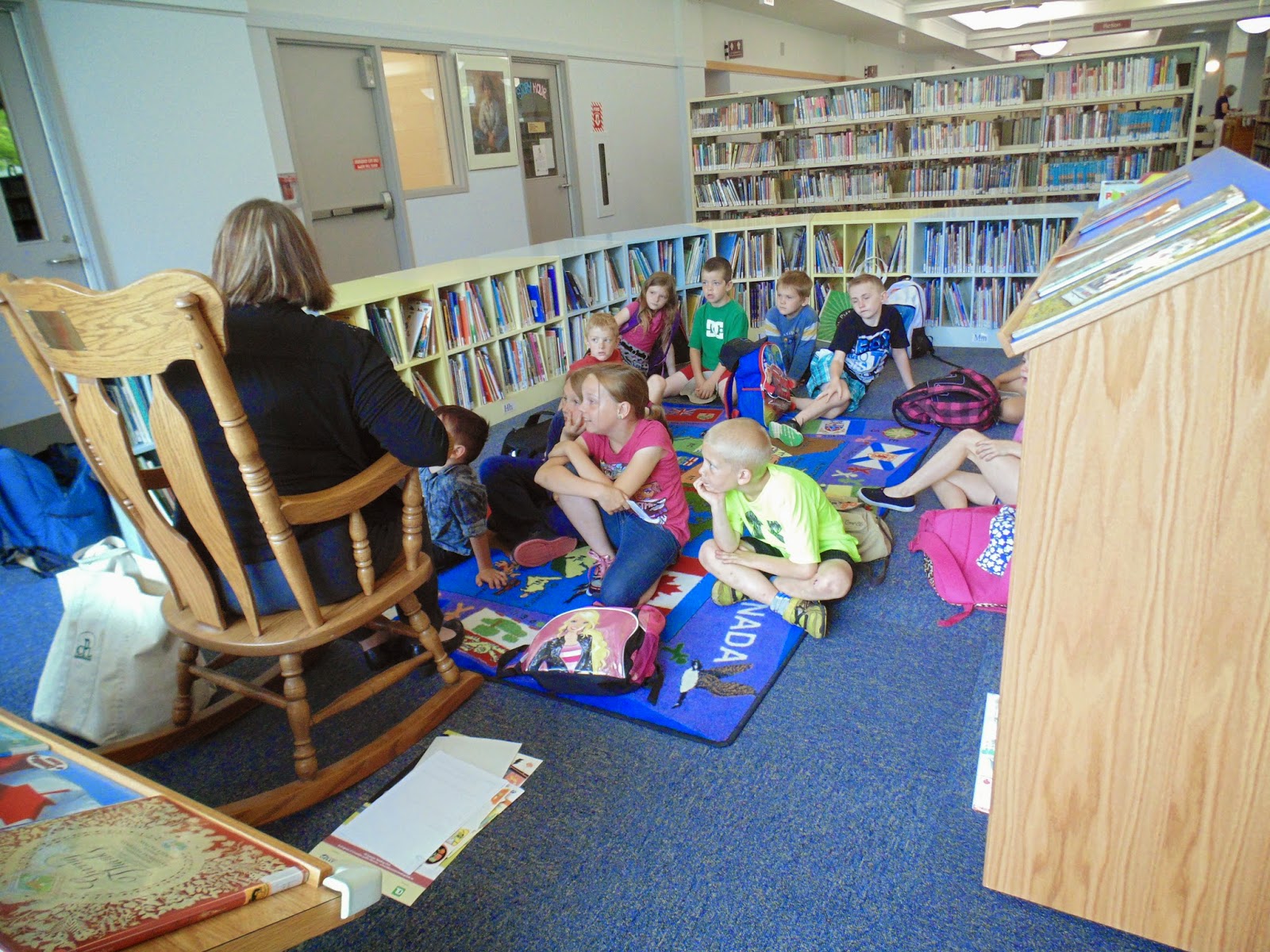 We walked to the library to get the kids their own library cards and to enrol them in the summer reading programme being offered. 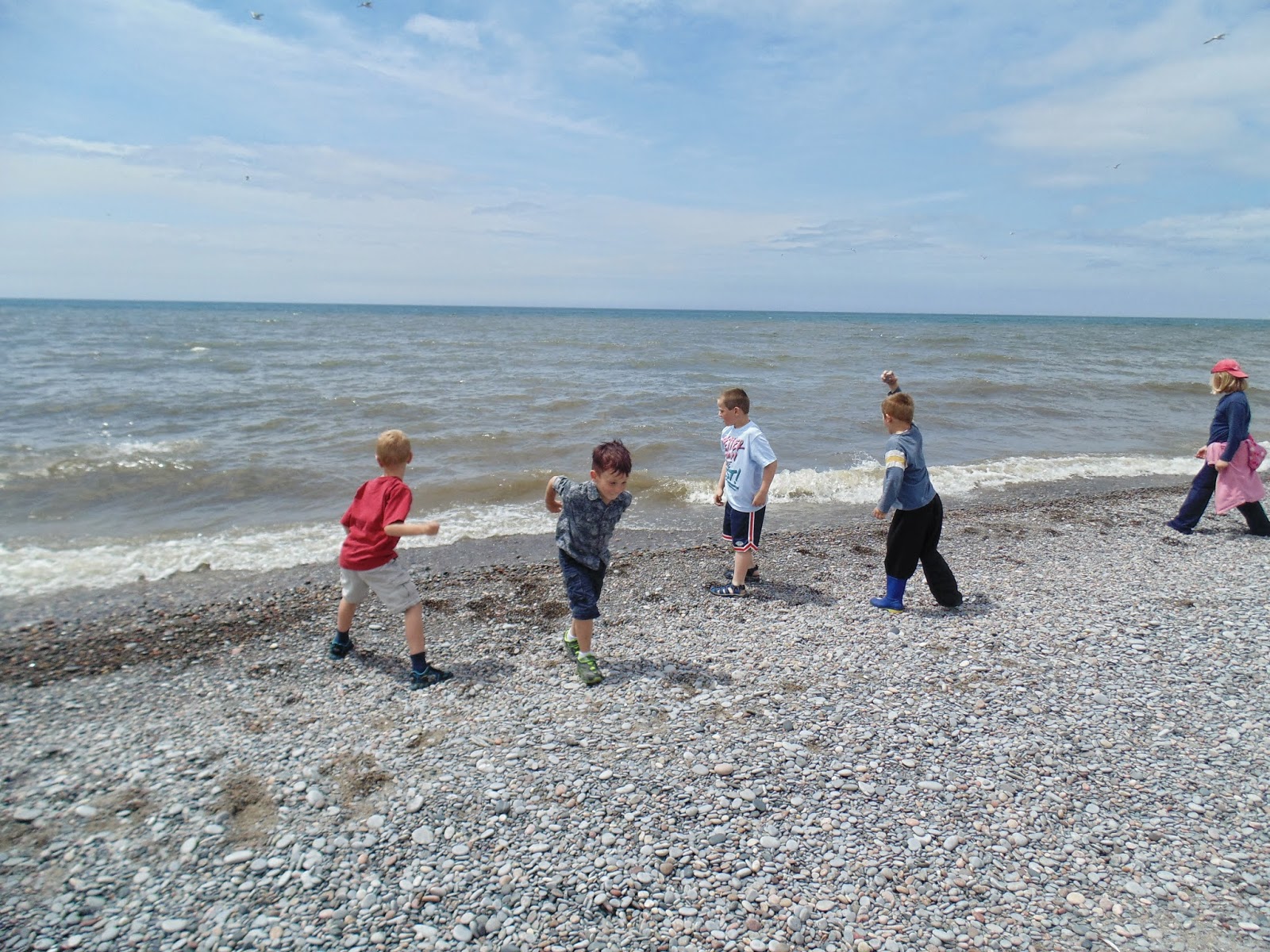 We walked down to the beach and skipped stones for awhile. 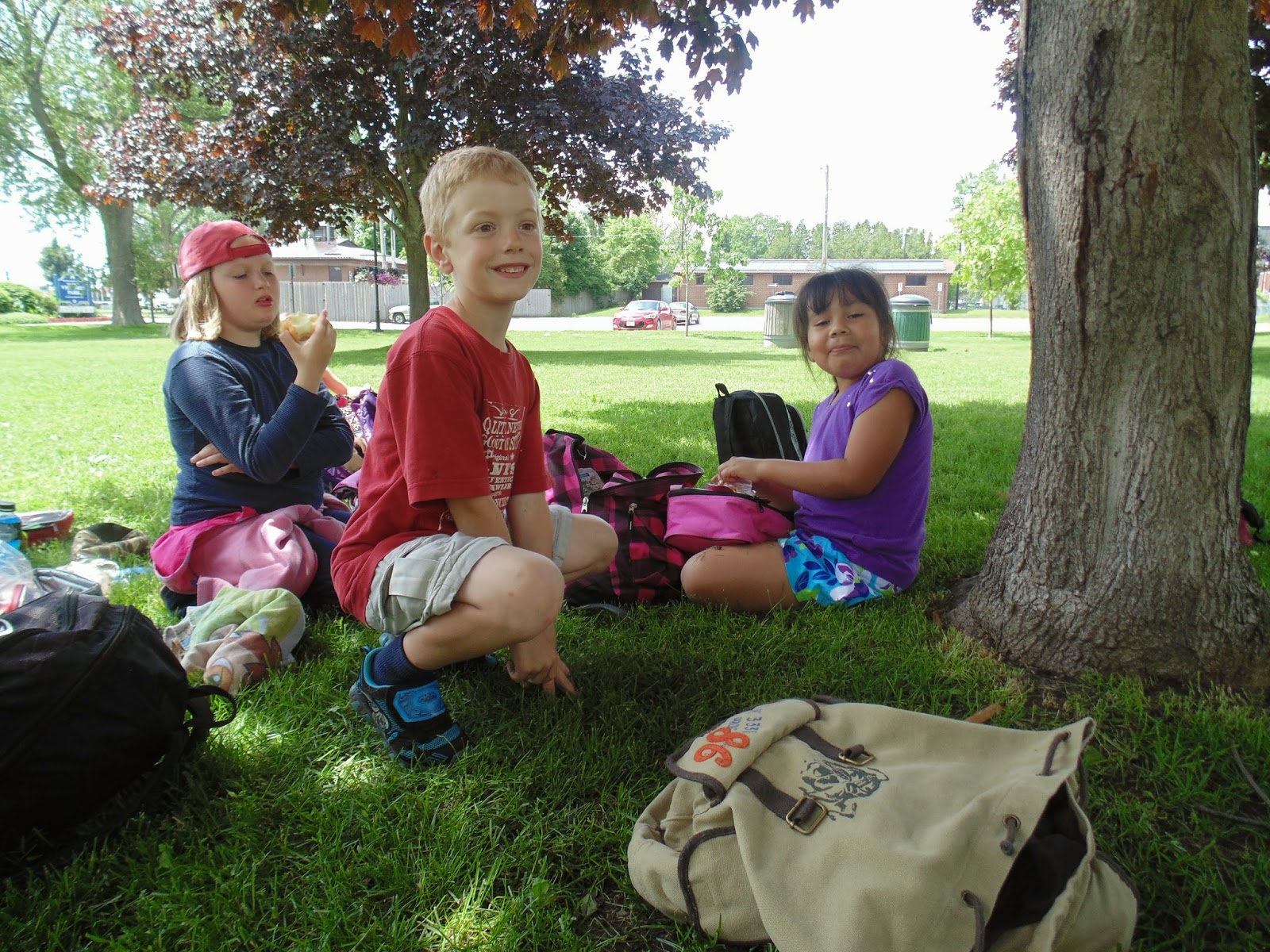 Then, we stopped for a picnic lunch. We ended our day by having ice cream together at an ice cream shop on the way back to school, savouring every moment of togetherness as keenly as we savoured the ice cream dripping down our chins.  For on that day, we were a family. A Grant Sine family.   And for me, that was what Grant Sine P.S. was really most about:  Family.

Hard to put a price tag on that.