The Story Behind the Photo: My Little Goofball.

The Story Behind the Photo:  My Little Goofball. 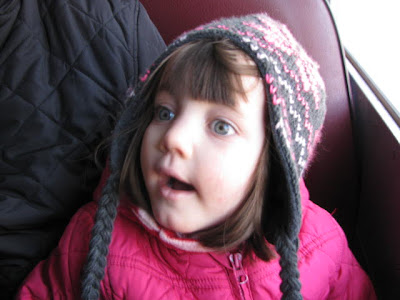 This is my youngest daughter, Sophie.  When most people see this photo of Sophie for the first time they typically react by snickering and then, commenting on her goofball expression. I have to admit that, when I first saw the photo, I laughed, too. However, as time has gone on and I have reflected more upon the context of when this photo was taken, I no longer laugh.

In fact, I have come to view this photo as being very precious because it serves as a reminder about being the best father I can be. I am humbled by the beauty of this photo because it captures a magical moment for Sophie; one that, for many reasons we, as adults, tend to overlook.

Here is the story behind the photo.

Sophie is my youngest of two daughters. Most parents who have had more than one child will attest to the fact that you raise a second child differently than you do your first.


When your first one is born, the world stops spinning, as you behold the wonder of the child you have just created. Then, without warning, you leave the hospital and your world spins horribly out of control, as you attempt to adjust to your new life. Every little hiccup from your First One results in consultations and phone calls on a scale that would make the Joint Chiefs of Staff blush. Your previous life, which was more egocentric than you ever imagined, now completely revolves around your little bundle of joy........and, you wouldn't have it any other way.

However, with the Next One, the euphoria of childbirth lessens. You have made this journey before. You know a lot of what to expect. You calm down considerably. The Next One can fall out of their crib in the middle of the night and roll right down the stairs. But, instead of responding with a full-blown panic attack as you did with the First One, you simply pick them up, dry their tears, check to make sure there aren't any bones sticking out at odd angles and return them to their crib. The stars continue to twinkle, the crickets to chirp and everyone awakens in the morning refreshed and ready to start their day.

It is not that you care any less about the child who come after the First One but, just the same, you now know that children are heartier, stronger and more resilient than all of the baby manuals had lead you to believe. You are a wiser parent or, so you believe. With the Next One, you often simply do what worked for the First One. You feed them the same foods, read them the same books, and take them to the same baby groups. You even introduce them to the concept of social interaction by having them tag along on play dates set up for the First One who, by now, has an established circle of friends.. The Next One seems to be developing well. Everyone flatters you with compliments about your beautiful children and you fill up inside with the sense of pride that, maybe, just maybe, you have figured this parenting thing out.

Unbeknownst to you, you have fallen into a parenting trap. The story of Sophie's photo above is a cautionary tale of how easily, even the best intentioned parents, can fall into this trap. It is the trap of forgetting that the Next One is not simply, just the next one. The Next One is a real person, too. They have their own trail to blaze, their own memories to make and their own dreams to realize. A hand-me-down childhood may not be what this child thirsts for. Parenting on autopilot can be very addicting.

The photo above was taken in March, 2013, as our family attended a maple syrup festival in the tiny village of Warkworth, Ontario, Canada. The citizens of Warkworth hold several events throughout the year that attract tourists to their village; the maple syrup festival being the first such event. Because they want tourists to see all of Warkworth and, because they don't want cars cluttering up their tiny downtown core, the organizers of the festival ask visitors to park at central locations, such as the public school, the hockey arena, etc. and, from there, school buses provide timely shuttle service to various events staged in and around the village. As we left home and were driving to the festival, my wife turned to me with a guilty look and said, "This is going to be Sophie's first time on a school bus, isn't it?"

With our oldest daughter, Leah, we were super diligent regarding the build-up to milestone moments. We always talked to her beforehand to prepare her for whatever event was to come. If we were really on the ball, we would get a book or two from the Library (1st dentist visit) or watch a video/dvd (1st airplane trip) or go to an event where other children would be there, along with Leah, to be introduced to a topic (such as going to kindergarten). School is very important in our home and, as such, we attend all of Leah's concerts, open houses, and fun fairs. We are involved in her nightly homework and we always talk with her about her day; especially at the supper table.

Into this atmosphere Sophie was born and raised. She has spent her entire life going to her sister's school, hearing about her sister's day; all with the proviso that, "One day, you'll be a big girl, just like your sister." Well, part of going to school is riding the school bus and here we were, mere moments away from taking Sophie on her first school bus ride and we had not said a single word to her about it. With Leah, weeks of build-up would have taken place. The big day of her first school bus ride would have been marked on the calendar, discussed endlessly and thoroughly explained. For Sophie, this big moment was even less than an after-thought; it was virtually no thought on our part at all.

It is an understatement to say that we both felt very guilty. It is not in our nature to let our children down. We strive to provide the very best life possible for our girls and, as a part of that, we have disciplined ourselves to pay attention to their daily experiences, their likes and dislikes, their strengths and weaknesses. We believe strongly in helping them to grow into healthy, intelligent, caring young women. Yet here we were, caught in the trap of thinking that because Leah, Keri (my wife) and I had been on school buses many times that the magic of a bus ride was yesterday's news and had no place in today's plans. Many of the experiences that we took for granted were experiences that Sophie was having for the first time. We found that easy to forget.


Look at the photo again.


This photo was taken once Sophie was seated beside me on the bus. Her eyes are wide with wonder. Her heart is beating with a sense of pride that says, "I'm on a school bus! I'm a big girl like my sister!" In this busy, multi-tasking, rush-about world in which we live, our own opportunities to bask in the warm glow of magical moments have become increasingly rare. That is our loss. There is wonder all around us; if we only take the time to look and appreciate it. That's what this photo says to me. It speaks directly to my heart. It reminds me that the best moments of my fatherhood are not the exclusive domain of my First One. I am so incredibly lucky to have another beautiful set of eyes to see the world through. So lucky, indeed!


In some ways, that bus ride in Warkworth was like getting a second chance at a better, more wonderful life. I have connected with Sophie in a way that I may never have if not for that moment captured so clearly in that photo. She may look goofy but it is my lack of thought that is displayed for all to see. I have learned a tremendous lesson about love and fatherhood and the extent to which beauty resides in all corners of my home. I’ve always loved Sophie from the moment she was born and had willingly given her my heart. But now, thanks to this moment, captured in this photo, I have come to understand the extent to which she has given her heart to me, as well. I am rich beyond measure and happy beyond words.

From thoughtlessness to good fortune; all in one photo.  That's the story behind the photo.

Posted by Thomas Charles MacInnes at 8:58 AM