W is for The Weeknd and The Power of Celebrity

In the not so very distant past, a lady named Oprah Winfrey had her own television talk show in the United States.  Besides being an excellent host, Oprah was, also, an actress, a philanthropist and a social activist but, above all else, Oprah Winfrey was a Kingmaker.  Oprah was a powerful woman; especially in the Arts community. With a single sticker from her "Book Club" placed on the cover of a new book, Oprah could take, even the most obscure author, and bestow upon them instant credibility and direct toward them, legions of faithful followers who would dutifully ratchet up the sales totals, driving the book quickly up the the New York Times Best-seller charts.  Oprah's Book Club is just example of the power of "the celebrity endorsement".

In Canada, we have seen the rise of a new celebrity power-broker. The rapper, Drake, has assumed the position of arbitrator of "cool" in this country.  His base of power is the city of Toronto.  Drake reigns over his dominion as a benevolent dictator. 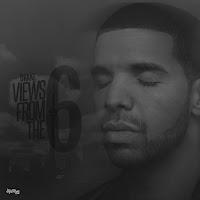 He has rebranded the city as "The 6" and Torontonians love it; especially the athletes, singers and artists, the ones in the public eye.  They took to referring to Toronto as "The 6" immediately, as if it had never been any other name, ever.  He helped to unveil the Toronto Raptors new uniforms during one of his concerts, and the crowds and the city loved it.  Drake is an a-list rapper who hangs with the likes of Jay-Z and Eminem. His cache enables him to effortlessly attract other "cool" figures into his realm such as NBA star, Lebron James and singers such as Pharrell.  Drake has acquired the same devoted following in Canada and, in particular, in Toronto, as Oprah ever had in the United States. He has power to affect change, on his terms and, he is gaining more confidence when it comes to using it. Drake is, single-handedly, helping the city put a strut back in its' stride. As fans, the relationship with Drake in symbiotic in that the more he leads, the more they want him to lead. They are his source of energy. They are his gang, as it were and he is their leader.  They are emboldened by his attitude and they welcome and support, unreservedly, anyone who he deems worthy of his blessing. Such is the case with, arguably, the hottest, fastest rising music star in the country these days, rapper and soul singer, The Weeknd. 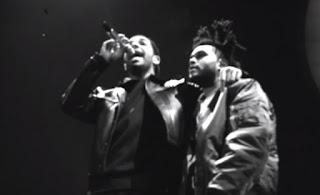 The Weeknd is the stage name of Toronto-area rapper, Abel Tesfaye.  He began his career only a few years ago in 2010. Initially, he bypassed the usual music industry requirements of having an agent, signing a record deal, etc. and, simply recorded three songs and released them on YouTube.  He only gave his name as The Weeknd and provided no other information; letting his music speak for him.  The quality of his rapping was so stellar that people took notice and talk of his music spread by word-of-mouth, ending with Drake taking notice and deciding to involve himself by placing the songs on his own website.  Such a personal and public endorsement catapulted The Weeknd into the spotlight in a hurry.  Only one year into his career, The Weeknd was shortlisted for The Polaris Music Prize and found himself performing at Drake's own OVOfest concert.

The Weeknd has displayed a tendency to use social media as his way to connect with his fans and to market his product.  Initially, he released three separate "mixed tapes" on his own website, available for free download.  Even when performing live on a stage, The Weeknd would never want to grant interviews. Instead, he would respond directly to his fans via Twitter, for example.  In doing so, The Weeknd created an air of mystery about himself while, at the same time, developing an intimate relationship with each fan who became a member of "his crew".

Eventually, The Weeknd signed a record deal and released an album that combined the three previously released mixed tapes.  This album, Trilogy, went into the Top Ten on BillBoard's Music Charts, in the categories of Rap and Soul.  Ever since then, The Weekend has had a steady stream of hit songs such as The Hills, Earned It, Live For, Often, The Morning and Kiss Land and has raised his profile considerably by appearing on such well-known soundtracks as The Fifty Shades of Grey.  The Weeknd is well on his way to enjoying a career marked by tremendous commercial and critical success. He has achieved what he has to date by maintaining strict control over how he releases new songs, as well as, in how he interacts with his fans.  He has always kept the music "industry" at arms length which, when you have friends like Drake in your corner, you are able to get away with doing.


***Note:  Part II of "W" will appear tomorrow, along with the "Hats off" list, too.   Thanks for taking the time to read my work. As always, your comments are gratefully appreciated.

Posted by Thomas Charles MacInnes at 10:34 AM