P: is for Plaskett, Purity Ring and, the Man, Oscar Peterson.

Kids today!  I have two daughters; neither one old enough to have her own newspaper route. But, both girls have their own iPods. Both girls primarily use the TV to stream movies and their favourite series On Demand. Both girls routinely set the wallpaper on the family computer, bookmark their own websites and immediately "Google" the answer to any question that may pop into their heads.

That these girls, aged five and nine, can seamlessly and innately interact with technology is not news.  Today's youth are universally regarded as being technically proficient at a level, often, much higher than that of the adults in their lives; be it parents or classroom teachers. The scary or, proud, fact of the matter is that I have done very little to educate my daughters in the ways of cyberspace, I have merely allowed them to watch what I do and they have taken their own learning in their own hands from there.

My evolution from technological neanderthal truly began with iTunes.   When I first drank the Apple Co. Kool-aid and bought a Mac computer, I was the proud owner of almost 1000 music CDs.
I was very proud of my music collection. In fact, after I have digitized the collection onto iTunes and realized that I no longer had a need for a physical copy of an artist's music and went to sell my CDs, the guy at the used record store mistook me for a DJ!
But, this post is not about my technological awakening but more, about the fact that I have a lot of music "in the Cloud" and that my two daughters have listened to much of it by rifling through the ranks of my records, digitally.   Both girls have their own iTunes playlists that were created by listening to my songs and then clicking and dragging their favourites over to their own playlists where, the songs "magically" appear.   As a teacher, I have always stressed the importance of reading aloud to children and of exposing them to rich literature. The same is true for Music.  Creativity takes so many forms that, as a parent, I can never bring enough beautifully written lyrics or clever compositions into the lives of my children. So girls, have at my collection of music; one day you will grow to understand what Daddy sees in Radiohead and Bjork.  But, for now, learn and grown and dance and sing your hearts out.  It is all good. 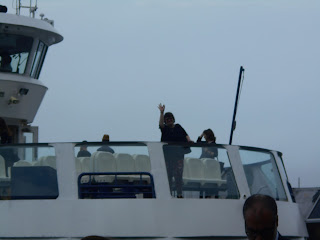 One of the songs both girls love is Nowhere With You by The Joel Plaskett Emergency.  In the song, he sings the line, "I took the Dartmouth Ferry into the Town, spent my pennies, bumming around.........".   Joel Plaskett has spent much of his musical career in Halifax, Nova Scotia and, like many people who reside there, he has taken the Dartmouth Ferry, back and forth across the harbour many times in his life.  My sister lives in Dartmouth so, when we head home during the summer, the dartmouth Ferry has become a focal point for our stops.
In this photo, my sister waves good-bye from that very same, Dartmouth Ferry, after spending the day with us in Halifax recently.

What I love about Joel Plaskett the most is how he writes about Canada as it really is.  He doesn't shy away from writing and singing about the real places that exist in this country and the real people who live here.  Like my daughters, Joel Plaskett grew up listening to his parents music.  He was influenced by everyone from energy and anarchy of The Sex Pistols, to the folksy poetry of Joni Mitchell, to the sharply written rock of Neil Young. As a result, Joel Plaskett is a multifaceted performer whose music comfort zone spans the boundaries of many genres and styles.  He was, originally, in a Halifax band called Thrush Hermit. But, the majority of his success has come from his solo career.  He has had high praise from critics for songs such as Through and Through and Through, Fashionable People, Lightning Bolt and, of course, Nowhere With You.


Joel Plaskett has won a Juno Award, he has won 17(!) East Coast Music Awards, he recently received the Lifetime Achievement Award from CBC Radio3 for his songwriting, too.  He has won awards at several international songwriting contests such as The Billboard World Song Contest and The Great American Song Contest.  Plaskett's musical catalogue is one of the most revered in Canada yet, he rarely receives airplay on mainstream radio. Hopefully, this highly acclaimed and very talented man will receive a slight push from the fifty or so readers of this post (who are encouraged to re-post my work and help to fan the flames of the careers of talented folks like Joel Plaskett.)
I feel very proud every time my girls lend their voices to Joel Plaskett's Nowhere With You  and allow his words to paint happy pictures in their minds of people and places that are important to them. It just reinforces the notion that music has the power to validate our souls and lift our hearts.  How lucky are children who grow up in homes where good music is played!


As my girls sift through my music collection, they are doing so in ways that reflect their personalities.  Both girls like to dance and move and so, both girls are drawn to the dance-oriented tunes that I own.  One of the groups that has captured their attention is an Edmonton-based duo named Purity Ring.  Purity Ring consist of singer, Megan James and musician, Corin Roddick.  James and Roddick have been an official band for only the past four years but, in that time, they have quickly gained a large following both, of fans and, of music critics, who adore them.  The band name was chosen because, just like an actual religious purity ring, the band wants their music to be "pure" and, as such, they write their own songs, create their own instruments and, even, design and sew their own clothes that they wear on stage.
Their debut album, Shines, rose as high as #2 on Billboard's Dance Music chart.  It was, also, so well-received that it was shortlisted for The Polaris Prize.  They have had lots of success with singles such as Lofticries, Fineshrine and Belispeak.  My girls are partial to Heartsigh.  I prefer Begin Again.
I, actually, enjoy all of their songs but, it really tickles my fancy to know that around our dinner table, I am able to have intelligent conversations with my growing girls about music and about what the songs they listen to are saying and how they sound.  I love how the fires of creativity are being kindled by bands such as Purity Ring.


The one area of my daughter's musical knowledge set that I am disappointed in, for the time being, is their willingness to embrace artists from the past.  I will admit that they have a mild interest in classical composers such as Beethoven, Mozart and Brahms but, whenever I mention Jazz or The Blues, the conversation remains short-lived.  That is too bad because they will have to read Daddy's blog in order to understand the significance of a gentleman named Oscar Peterson.

With some performers, a song is just a song. But, with some other performers, music becomes the voice of whole cultures or races. Its' soul yields the power to confront injustice, to stir passions in the masses and to give dignity to the oppressed and the ragged among us.  So it was with Mr. Oscar Peterson.
Peterson grew up in Montreal in a family setting where Jazz was loved and where classical music was respected. While still a young man, Oscar Peterson took formal piano training in the classical style. But, within his heart and mind, the lure of Jazz, Bebop and Boogie-Woogie music competed for his attention. Peterson was consumed by them all and practised relentlessly under the tutelage of the finest music teachers in Montreal.

Peterson is considered one of the finest Jazz pianists the world has ever seen.  He has had this reputation most of his life.  However, despite the universal acclaim that was directed toward him, Peterson's musical journey was anything but simple, simply because, Oscar Peterson was black.  The ugly reality of racism and, in particular, of racial segregation played a great part in Oscar Peterson's career.  He was refused entry to certain venues because of his colour. Sometimes, he would be denied his wages for having played, because he was black.  There were other times when Oscar Peterson wasn't even allowed to share the same taxi with his white manager!  Genius and virtuosity should grant the bearer a certain freedom to simply be. But, that was not Peterson's destiny.  He was never to be "just a jazz player".  The historical events of his time called upon Oscar Peterson to be a difference maker beyond the field of music. Fortunately for all of us, Peterson, like Jackie Robinson and Martin Luther King, proved to be a giant upon whose shoulders the rest of us have been allowed the privilege of standing.

The fight against racism fuelled the passion of displaying and helped him bring that piano to the brink of flames, many a night on many a stage.  While he played with fire in his fingertips, he comported himself with dignity, good humour and with class.  His life was as above reproach as was his Jazz.  But, as we all know, actions can speak louder than words. He faced racial hostility head on in the best way possible, by integrating his band.  The Oscar Peterson Trio featured both, black and white players.  The skill level of all three musicians was very high; so high as to disabuse everyone of the notion that the races could not work together in such harmony and with such complimentary skill.

Oscar Peterson is one of the most respected and decorated citizens Canada has ever produced.  He has won too many wards to list but, some included, 8 Grammy Awards, multiple Juno awards, too.  He is a member of the Canadian Music Hall of Fame, the Juno Awards Hall of Fame, The Jazz and Blues Hall of Fame and he has a star of Canada's Walk of Fame in Toronto.  Oscar Peterson has been awarded The Companion to the Order of Canada, The Order of Ontario, The National Order of Quebec and the Ordre des Arts et des Lettres in France.  Finally, Concordia University in Montreal has named their concert hall, The Oscar Peterson Concert Hall, in his honour.

For now, my daughters believe that I am the best man that there is. Some days, they believe that honour belongs to their Poppa.  In time, however, they will grow to learn that there have been people in our country who have moved mountains in the course of their lives. They will learn the names and recognize the faces of these heroes who have endured so much and helped make the world a better place for their having been there.  One day, my girls will come to know who Oscar Peterson is and, when they do, I hope the first thing they mention about him is how well he could really play!


Lots of great "P" performers today so, let's give them all a big tip of the old hat:

Posted by Thomas Charles MacInnes at 10:54 AM