J is for Mendleson Joe, Carolyn Dawn Johnson and Japandroids!!!

I have always been a firm believer, in times of confusion and darkness, either personal or on a national level, that The Arts act as a beacon of enlightenment. Our poets, artists and songsmiths can be counted on to lead the way forward, cutting through the propaganda and spin, bringing clarity and reason to us through their creativity and honesty.
For that reason, I have always been a strong supporter of the Arts and of the creative process, in general.  It is important to think creatively, to think "outside the box" when faced with problems and, to believe in the vision that exists within your heart.  To be an artist, of any stripe, is to answer one of the highest and most important and noble callings a society can have.

Mendleson Joe is an artist and musician who has lived most of his life in the Toronto area.  He has produced a variety of songs; some for children, some about Canada, too.

But, he is most well-known as being someone who is not afraid to make political statements and observations via his music and his paintings. His BS detector is highly-tuned and he is quite comfortable taking politicians of all parties down a peg or two should their egos become too grand.  His paintings are simple and direct and their messages are usually very clear. 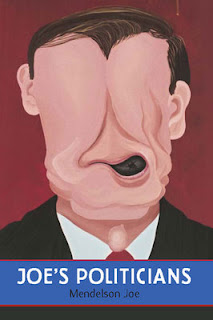 I am thankful to Mendleson Joe and to Margaret Atwood and to Neil Young and to anyone and everyone who calls themselves an artist and who has the courage to speak the Truth in times when an honest thought or observation may be the most valuable contribution that can be made.
As Raoul Dufy states,

My eyes were made to erase all that is ugly.

Thanks, artists!   Thanks, Mendleson Joe!

Jay Onrait is a television sportscaster.  He came to fame in Canada as sports anchorman on The Sports Network.  He is known for his funny observations and pronunciations of the names of the athletes he reports on.  I follow Onrait on Twitter.  He doesn't post very often. But, one Saturday night, after Hockey Night in Canada had ended and I turned on my iPad, I was greeted with a tweet that simply said, "TONIGHT!  LEE'S PALACE!  JAPANDROIDS!"   I figured that if Japandroids were good enough for Jay Onrait then, they must be worth a look-see.  Thanks, Jay, for the tip because I loved what I saw.


Japandroids are from Vancouver and consist of singer, Brian King and drummer, David Prowse.  Their sound has been described as a combination of classic rock and punk.  Their shows have lots of energy.  Although relatively new on the music scene, they have already garnered lots of positive attention from music critics across North America; with both of their first two albums being nominated for Music Awards, such as the Polaris Prize and both, being included in year-end polls of the Best Albums of the Year from around the world. In fact,  good old Spin Magazine named them as 2012 Band of the Year, while Rolling Stone Magazine named their album, Celebration Rock, as one of "the top ten Summer albums of all time!!!"

Japandroids came to me from a tip; a tip I now gladly share with you.  I hope you enjoy them as much as I do.  :)


It is funny how some performers can be incredibly successful within their own genre of music but, relatively unknown, outside of that genre.  That was the case for our final performer, Carolyn Dawn Johnson.  In preparation for this post, I asked six relatively intelligent adults who happened to be nearby, if they had ever heard of Carolyn Dawn Johnson.  Five of the six replied with a shoulder shrug and a quizzical, "Who?"   The sixth adult, who was a Country music fan clapped her hands together and emphatically said, "Of course, I know who she is, doesn't everybody?!"

Carolyn Dawn Johnson is a Country music singer/songwriter and is one of the most critically-acclaimed in Canada's history.  Johnson has had #1 hits multiple times in Canada and in the U.S.  She has won the Juno Award for Best Country Artist and has won 15 Canadian Country Music Awards! Carolyn Dawn Johnson has won awards for her songwriting, her singer and for her music videos.  She is multi-talented and much-respected all across North America.

Growing up in Alberta, as she did, listening to her parents Jim Reeves and Don Williams collections, she is quoted as wondering how anyone could live without music in their lives.  Johnson has written songs for Nashville's headliners such as Reba McEntire and Martina McBride. She has opened for legends such as Sara Evans, Kenny Chesney and Alan Jackson. She, now, headlines her own shows and is drawing raves reviews for her performances.

So, if you are into Country music then, enjoy an old friend. If, like me, Country really isn't your thing then, please allow me to introduce one of the most successful and respected Country Music artists Canada has ever produced......Carolyn Dawn Johnson!


Please join me and giving a big tip of the old hat to the following artists whose names begin with the letter, "J":

Posted by Thomas Charles MacInnes at 10:26 AM