F is for a Short History of Fame

I was famous once.  It was just for the requisite fifteen minutes but, just the same, famous I was.

The year was 1981 and I was in Grade 11 at the time.  As you can see from the photo from my high school yearbook, I was deep in the throes of teenage nerdiness and gawkiness.  I am in the centre of a "club" photo; not a sports club or an acting club or even a debating club no, it was a club for nerds named after a television quiz show for high school students called, Reach For The Top. 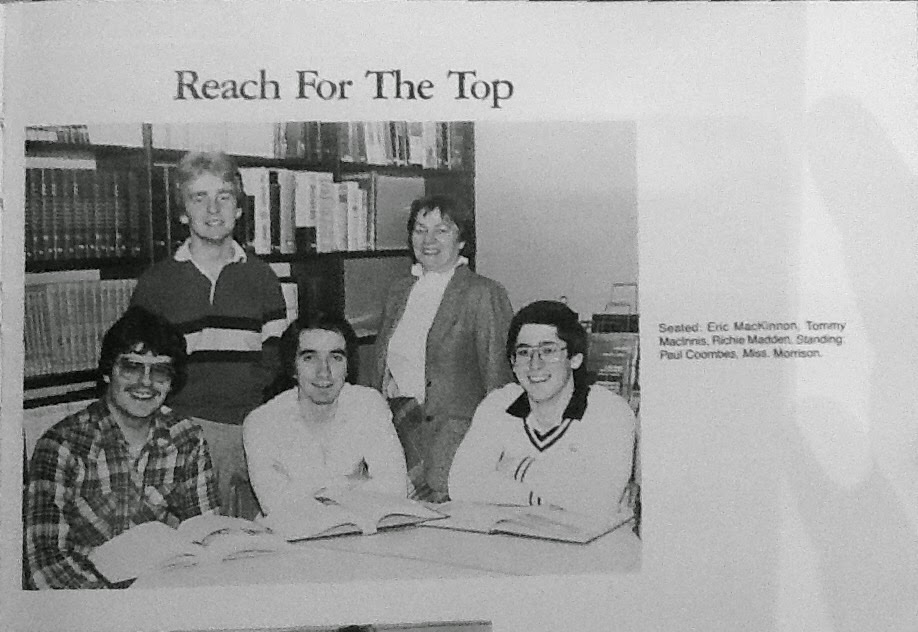 The world was a much different place in 1981 than it is today.  Back home, in my little fishing town of Glace Bay, Nova Scotia, there was no internet. Cable television had not made its appearance yet.  There were no MTV music videos.  There were no such things as personal computers or computers in school classrooms.  Back in the day, we received our news and information from our local newspaper, our small town radio station and, of course being Canadian, two TV channels; the Canadian Broadcasting Company (CBC) in English and in French.

Reach For The Top was a quiz show that pitted two teams of area high school students against one another in a competition of general knowledge.  The show used to draw respectable ratings; especially in the towns and villages who had teams competing in a given week.  Well, as you can see from my high school glamour shot, I made my high school's Reach For The Top team.  We were all good friends outside of the team, nerds of a feather, if you will.  Without girlfriends to distract us, we all had lots of time for trivia which left all four of us feeling pretty cocky about our chances during the regional tournament that was upcoming.

Reach For The Top was filmed in Halifax, the provincial capital of Nova Scotia.  Halifax is a four and a half hour drive from Glace Bay so, going there on an overnight excursion was very exotic to us all.   The format was simple: sixteen high school teams squared off in a round-robin, single-elimination style format.  All of the games were filmed in one day, even though the matches would be aired over the course of several months on local TV.   So, my friends and I arrived at the studio, early on a Saturday morning and were escorted straight into the make-up room. It is the only time I can every recall having make-up applied to my face but, apparently, we were too pale to go on just as we were.
Our first match was against a school from the southern reaches of the province.  We were taken to the actual set. After having watched so many Reach For The Top episodes over the years, actually being there was like being at the Taj Mahal or the Empire State Building.  The studio lights were far brighter than I expected.  It was hot there. Studio hands ran us through the technical aspects of pressing the buzzer to ring in our answers and how it was critical to avoid profanity because there was no five-second delay feature at that time. The show was live to tape.  When all was good,  signs with our names on them were placed in front of the chairs we were to sit it. The announcer came out and shook our hands and then, it was time to start taping.


We did extremely well during our first match and set a provincial record for points at the time.  We  shook hands with the defeated squad and then, returned to the "studio audience" to watch the other matches.  Our second round match was against a local high school team and, whether it was over-confidence on our part or the fact that we just came up against a group of nerds even nerdier than us, we lost and the tournament was suddenly over.

However, here is how I was the one out of the four of us who became famous. 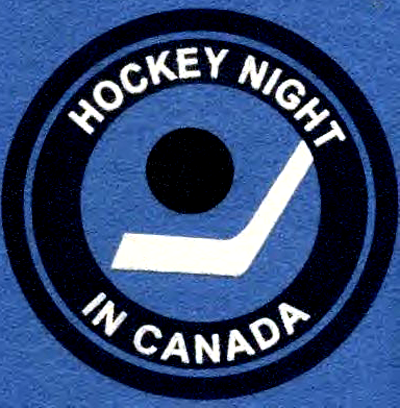 The most popular show on CBC during my youth was Hockey Night in Canada, which aired every Saturday night.  Everyone who owned a tv set watched Hockey Night In Canada.  Immediately after the conclusion of the game, the national arm of the CBC would turn the broadcast over to the local affiliates who, in our case, would air a five-minute free-time political broadcast by one member of the local legislature. Immediately following those five minutes, the local CBC channel would air a promo for the upcoming Reach For The Top episode.  So, whether you were really interested in the show or not, the huge Hockey Night In Canada audience was often still watching their tv, awaiting the local newscast, and, as such, they would see the Reach For The Top promo by default.

Well, small things become big things in small towns and word soon spread that my team had set a provincial record during our match and that our match was going to be the one featured in the promo after the hockey game. So, everyone from my area sat glued to their sets and watched as the announcer stated, "...And coming up this week on Reach For The Top........."  The camera cut quickly to a close-upof the show's announcer asking, "Which Major League Home Run Champion once pitched a no-hitter?" The buzzer sounded immediately. Quick cut to a close-up of me answering, "Babe Ruth" and then the announcer says, "That's correct!"  The theme music played and the promo ended.

Right then and there, I became the face of a great victory for my school and, by extension, my community.  That we subsequently lost, didn't matter.  I became a celebrity who brought home victory to our little town, even though, truth be told, I didn't answer as many questions as some of my teammates had. That was inconsequential.  There I was, before the eyes of my community, right on their tv screens, uttering a correct response.......a provincial record-setting response.

The reaction was swift.  I was someone who was, and still is, fairly shy and quiet. I wasn't part of the in-crowd and never got invited to parties or asked out on dates.  But now, I couldn't walk anywhere in Glace Bay without car horns honking, people rolling down their windows to congratulate me and, best of all, girls.......girls actually wanted to talk to me. Sometimes, even girls from other schools who only knew me from that ten-second promo.  I was known everywhere by everyone....for a week or so.   Then, news of our loss leaked out and people moved on with their lives and I retreated into the silence of my solitary teenage world.

I tell this story because it harkens back to a far more innocent time when it came to instant celebrity. I never had fan pages created for me on Facebook. I had no official followers. No one clicked Like beside a status update. The episode didn't air in perpetuity on Youtube. No internet trolls sought to sully my name simply because they could.  My life never reached the dizzying heights of having instant fame and money and groupies nor, did it reach the depths of being a cartoon meme, uttering "Babe Ruth!  Babe Ruth!" in any number of GIFs that would spring up like weeds.  Instead, I became popular. The feeling felt odd but, funny at the same time.  Then, it all went away, like it never even happened and life returned completely to normal.  I had nothing shameful to haunt my future, unlike so many young people today who have their fifteen minutes of fame in front of a world-wide audience.

We live in times that are no longer innocent and, for that reason, education is so very important for children when it comes to social media.  Media literacy is now formally taught in schools but, as we all can attest, the real lessons for many of today's youth still come the hard way via the viral nature of our networking world.  If you have your own children at home with you, please help them to practise safe internet usage.  If you wish to learn about some basic safety rules for the internet, you can click here and here.  The internet is a wonderful invention and is allowing us, as a species, to communicate in ways that can positively impact our world....but, only when it is used with knowledge and an understanding of the potential dangers that exist.