This story is about my Mother-in-Law, Sheila.

A kinder, gentler, more generous soul than hers would be hard to find.  Sheila has touched many lives in her roles as wife, mother, sister, Gramma, mother-in-law and friend to countless of us whose lives are made better because of her presence in them.  She helps raise money for charity by selling daffodils on street corners, for crying out loud!  She is one of those people; oozing kindness and concern for others ahead of herself.

So, when that most unwanted of visitors, Cancer, arrived in the form of a lump in her right breast, we were all justified in wondering where God's Love and Mercy had gone.  How could such a nice, decent human being be abandoned by Fate like this?  Moms and, by extension, Grammas, are not allowed to get sick. It is in the rules!  Too many people rely on this woman. She couldn't really have cancer, could she?

Tests were performed and the diagnosis was confirmed.  The options: mastectomy, double-mastectomy, chemotherapy, radiation, drugs of one sort or another, hair loss, death, life.

Sheila never gave in to the temptation of public displays of self-pity.  In private, however, the weight of her dilemma tore at the core of who she was.  To never see her grand children grow up was unthinkable.  To leave her husband to fend for himself when he had never washed a pair of socks before in his life, was unimaginable.  To lose a breast or, both breasts, was difficult to comprehend for someone so closely associated with warm hugs and tender cuddles.  So, deep in the privacy of her home, alone with her thoughts, Sheila looked into her heart and prayed for Life.

Surgery was set for the beginning of December, 2013.  The doctors stated that they believed the operation was successful and they had gotten all of the tumour.  But, they cautioned, only further tests and treatment would confirm this.  So, Sheila reserved any thoughts of happiness and focussed on Life and what needed to be done to continue to enjoy it.

She began taking medication, in combination with radiation therapy at a hospital in Kingston, Ontario.  For a full month, five days per week, Sheila submitted her body to the radioactive rays that were her ticket to a renewed chance at Life.  Everyday, she and her husband, Bruce, went to the hospital and sat with the other patients; men and women, adults and children, the terminally ill and those with Hope left and, they pushed forward with treatment.  After each treatment, they would go out for lunch or dinner, they would arrange to visit friends and family or else, they would distract themselves with retail therapy.  I kidded them that it was almost like they were on holidays.

But, we all knew it was no holiday.

On her second-last day of treatment, my wife and I and our two daughters, along with my sister-in-law and her two children, all went to spend the day with Sheila and Bruce. We would be their distraction for that second-last day.  The sun shone brightly, the temperatures were almost balmy and Spring-like and we all had a wonderful day together.  As we left, we all congratulated Sheila on being one day away from the end of her treatment.  She accepted our hugs but, even then, so close to the end, she refused to lower her guard and admit that she was excited, too. With cancer, that rat-bastard of diseases, you can never take your eye away, never let your guard down. So, Sheila simply accepted our hugs and smiled and then, we drove away, leaving Bruce and Sheila alone.

I am not sure what traditions exist at other Cancer facilities but, at the Kingston Cancer Clinic, when a patient has completed their treatment and has been declared to be cancer-free, they are encouraged to ring a bell in the waiting area. The sound of the bell indicates to everyone that someone has been given their life back.  The ringing of the bell signals that there is Hope for everyone else, as they continue to endure their own treatments.  To those battling cancer, there can be no sweeter sound than that of the bell ringing so clearly, so crisply.

As Sheila received her final dose of radiation, she received the news that the doctors were correct; they had gotten all of the tumour, the cancer had not become systemic and that, as of the end of that final treatment, she was being declared Cancer-free.

It is hard to imagine to range of emotions that would be called into service at the receipt of such joyous news.  Logistically speaking, she could go home now and return to her life. She could sleep in her own bed, next to the man whose snoring used to be her biggest complaint in life.  She could be Gramma again, welcoming her beloved Grandchildren into the warmth of her embrace.  She could live again.

On the day Sheila rang the bell, the warm spring-like weather had changed into a raging snowstorm.  Highways were closed, events were cancelled across Ontario but, none of that mattered for, on that day, Wednesday, March 12, 2014, Sheila Audrey Davis rang that bell and, finally......finally, allowed herself a moment or two of pure, unadulterated JOY!!!!!

There is something about the sound of a bell. Whether it was the freedom bell heard by slaves who had made the perilous trek to Buxton. Whether it is the sound of the school bell signalling the end of another day of learning.  Whether it is the bell in the Kingston Cancer Clinic delivering Hope and Life with each ding and clang.  The clarion call of a bell often means freedom. And, with freedom, comes Joy. 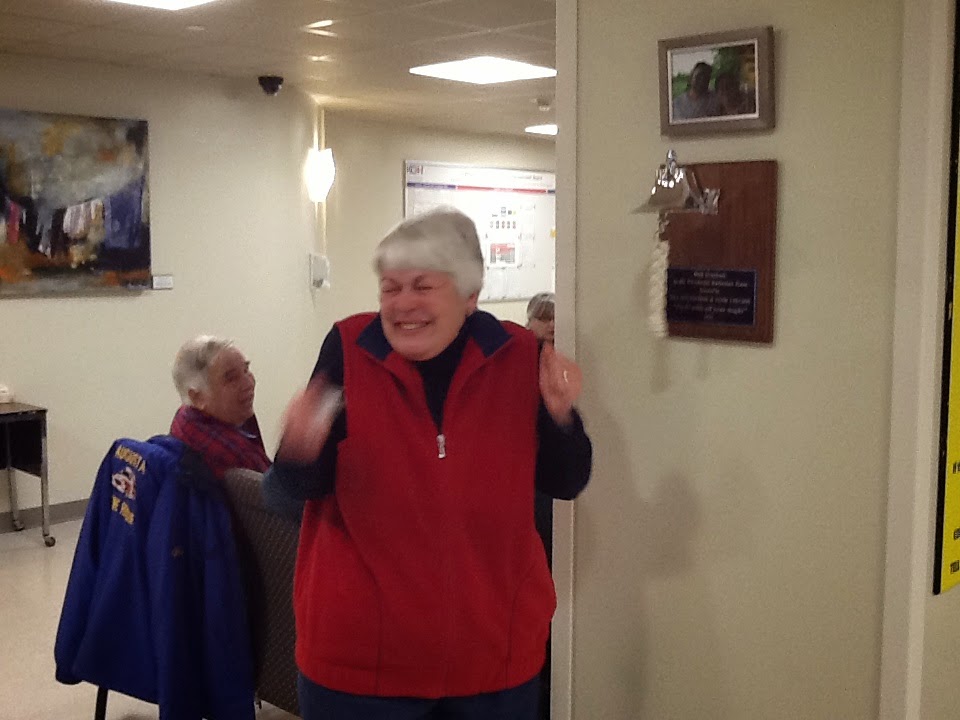