This weekend's Trifextra challenge is to write about "monsters" being in unexpected places.  Here is my take on this challenge. 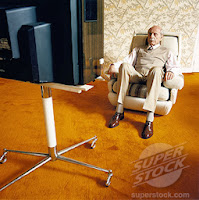 Colleen pried the remote from his hand.

each to their own thoughts,

their real world on TV.

***I'm not sure how television channels are delivered in your part of the world but here, in Canada, digital cable companies are mandated to dedicate one of the channels they offer for local programming only.  These local channels might offer such programmes as an interview with the local mayor, coverage of a parade or an awards banquet but, mostly, they feature an endless loop of community advertising. This often takes the form of announcements for blood donor clinics, pot luck suppers at a community hall, food or toy drives and so on.  Sometimes, local photographers upload photos from around town that are displayed along with the community announcements. Soft music rounds out the broadcasting trifecta. The loop plays 24 hours a day, seven days a week.
My story is about how a lot of seniors are interacting with their world, nowadays.  How they are, increasingly, house bound, relying on television to give them a sense of how things are in the world. And, how, increasingly, frightened they are becoming based upon what is being broadcast; on the news, especially.  They often believe the monsters on tv are real. Consequently, they are becoming scared of the world beyond their doors based on the unreal world portrayed on Network TV.
Posted by Thomas Charles MacInnes at 11:44 AM