I quite enjoyed the experience of being involved in the recently-concluded A-to-Z Blogging Challenge.  Writing about children and about education from my perspective as a father and as a teacher, was very rewarding and fulfilling.   When I set about writing 26 posts, I did so because I love to write and I wanted to push myself to see if I could maintain my energy level and maintain the quality of my work throughout.  I am pleased with the end results and, judging by the comments of my fellow writers (those new to me and those I knew prior to the Challenge), I met my twin goals in the eyes of others as well. 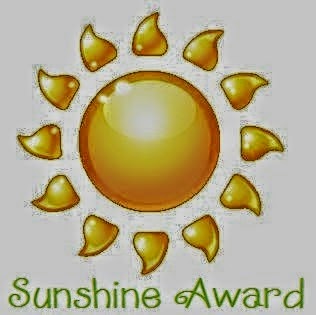 That was reward enough for me.  I would have been very content to have stopped there, basking in the warm glow of my accomplishment.  However, my day was brightened by, not one but, two delightful affirmations, in the form of two separate nominations for the Sunshine Award; first from my friend, Shailaja (who writes brilliantly at her blog entitled, Diary of a Doting Mom) and then, from my new friend, Jayanta (who writes passionately about improving life on his blog entitled  My Thoughts).

In order to be able to accept this award, There are rules to follow and criteria I have to meet so, without further ado, here are da rules!

- I must proudly display the Sunshine Award Badge.

- I must link back to the folks who nominated me.

- I must nominate and link back to up to ten bloggers of merit.

- I must write ten interesting things about myself.


Well, the first two rules were easy to follow, as is the fourth but, I am finding Rule #3 to have me at a disadvantage.  This award is given to bloggers who are rather new to blogging.  It is intended to be for blogs that have fewer than 100 followers.  So, in essence, it is akin to being a Rookie of the Year Award.  I am fine with the public pat-on-the-back at this early stage of my career. In fact, I am very honoured.


However, being so new, I do not have that many contemporaries who have fewer than 100 followers!  I have searched my own list of favourites and have come up with the following small but, powerful list:

Isabel Yeo
Conlee Ricketts
Laura Alonso
*I would have nominated Jayanta, too, but he has already been nominated by two others.

Hopefully, my list of three talented writers will be enough to merit the keeping of this award.  :)

As for ten interesting things about me.  I will leave it to you to decide how interesting the following ten things are but, here goes:

1- If bacon was liquid, I would drink copious amounts.

2- My favourite hockey team is the Toronto Maple Leafs.  They won the league championship, the Stanley Cup, when I was three years old.  They haven't won since.  I am 50 years old now.  :(

3- I have never broken a bone in my body, ever!

4- My father passed away when I was 11 years old.  I was the oldest child in my family and, instantly, became the "man of the house."

5- Orange Pekoe tea is my drink of choice.......as long as it is good and hot when poured.

6- My favourite musical group is Radiohead.  My wife of twelve years would be hard-pressed to guess that.

7- I find it difficult to maintain a healthy lawn.  My thumb is, definitely, not green.

8- Cape Breton Island will always be Home to me, even though I haven't lived there for 30+ years.  It was where I was born and raised and, as the old saying goes, is in my blood.

9- I am more a night owl than a morning person. But, a good sunrise does my heart good.

10- I have never had a hole-in-one while golfing but, my father-in-law has had two; the second coming just last week!

So there you have it!   Thank you again, Shailaja and Jayanta, from the bottom of my heart, for honouring me as you have with this award.  I appreciate it very much.