K: K is for Kindergarten; Where the Superheroes of the Educational System Reside!

As a result of my participation in the A-to-Z Blogging Challenge, I am making connections with wonderful people from around the world.  One of them, a writer from San Fransisco, posted a comment on Facebook yesterday that made me chuckle and helped to inspire today's post.  He announced that he was about to go and meet his child's Kindergarten teacher for the first time. He wondered how it was possible that his beautiful baby girl had grown up to be old enough to leave him and go to school.  There was a large sigh implied within his words.

I hear you, Brother!  As a teacher and as a parent, I hear you!

When my eight-year old daughter went to school for the very first time, I was not able to go because I am a teacher and, it was the first day of classes for the students at my school. However, my wife was able to attend.  Our daughter's school is a small school, in a quiet community, nestled among a grove of oak trees. It is idyllic in many respects.  The school has, as one of its' mandates, developed a high sense of community among all students and families and, as such, when you attend this school you, automatically, acquire an extended social network of educators and parents.   So, as my wife and daughter left their car and walked on to the playground of the school prior to the entry bell ringing, they did so in the company of almost one hundred other moms and dads and grand-parents.  The sun was shining that day. The grass was green, the school yard lush.  There was an air of excitement as older students re-connected with friends that they hadn't seen since starting their summer vacation.  Parents chatted amicably. Teachers mingled with the crowd, greeting new students and former students, alike.

Then the bell rang.

The older students immediately sprinted toward the places where they were to line up to enter the school. My daughter took my wife by the hand and, together, they walked toward the spot where the Kindergarten children were to meet.  And, as they walked, my wife began to sob.......uncontrollably!
Our first born, our first-loved, our baby, was going off on her own and leaving us behind and it pulled on every heart string that my wife had within her.   A few of the other Moms, the ones who were used to the first-day-of-school routine, came over to console her.  Even my daughter's teacher came over to let her know that everything was going to be ok and that our daughter was going to be safe with her.  In fact, she even called our house at lunch time to see if my wife had recovered from the emotion of the morning!   It is funny what a difference a small gesture like that can make.  When we stop and realize the humanity involved in this enterprise of educating children, it causes us to appreciate the humane treatment with which children (and, in some cases, parents) are accorded every day by their teachers and vice versa.  At the end of the day, how we treat each other is a measure of the calibre of our society.  When such treatment is built upon a foundation of dignity, patience and mutual respect then, everyone benefits.

So, as I think about my new friend going to meet his daughter's Kindergarten teacher for the first time, I want to reassure him that she is walking into the next phase of her life in the care of an educational superhero!  For that is what Kindergarten teachers truly are!  They are miracle workers of the highest order.   In order to help you appreciate this, consider this:

My youngest daughter is four years old.  She is a lovely, beautiful, creative child and she is loved unconditionally by my wife and I. However, and it is a big however, she is far more work than her 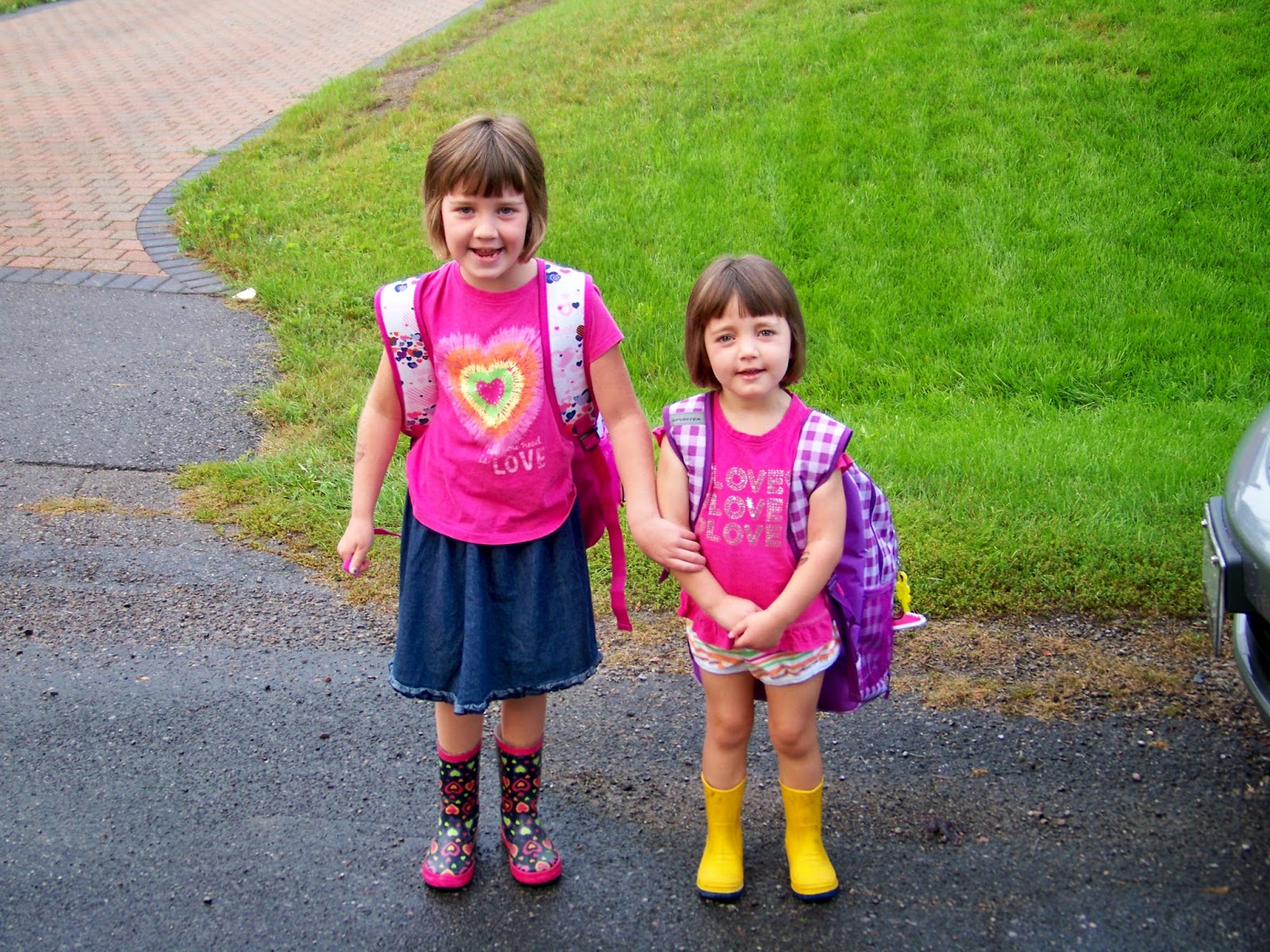 older sister ever thought about being!  She is the child who gets tucked into bed at night and then, immediately starts singing at the top of her lungs, "Let it go!  Let it go!  Can't hold me back anymore!!!!!"   When we are rushing to get dressed and out the door in the morning, she is one who routinely goes boneless and flops on the floor, seemingly paralyzed with the inability to put on her own socks!   She is her older sister's tormentor during periods of quiet contemplation.  She touches things that aren't hers, leaves trails of debris scattered throughout the house and she is just... just, beginning to master going to the potty on her own.

So, just imagine if, instead of rushing out through the door in the morning that, instead, twenty-five parents knocked on our door and dropped off twenty-five other four year olds just like our own!!!
Twenty-five kids; some of whom would be crying for their Mommas, some of whom were not toilet-trained at all, some who were coked to the gills on sugar, some who were painfully shy, some who wanted to fight and some....well, most, who wanted your undivided attention at all times!   That's what Kindergarten teachers face on a daily basis.

So, to me, it makes what my oldest daughter's Kindergarten teacher did on that first day of school, all the more remarkable.  When faced with twenty-five wild cards. Twenty-five ants at a picnic, my daughter's teacher still had the werewithal to make a phone call to my house during her lunch break to check on my wife!  That act rocks my world!

To me, as a teacher, I see how these Kindergarten teachers take, what appears to be uncontrollable chaos and, then, slowly, begin a process of transformation that renders, by way of artistic comparision, what I do in my classroom as simply being paint-by-numbers.  Through boatloads of heart, patience, skill and, a little bit of hocus-pocus, Kindergarten children begin learning how to sit quietly and listen, they learn how to tidy up and put things back where they belong, they learn to share and take turns and walk on marshmallow feet, in a straight line, when they move from the classroom to the Gym or to the Library.  In short, Kindergarten children turn into students.  That transformation from the first day of school, when they are akin to a bag of cats; to the end of Kindergarten, when the students are, well, students, as we envision students to be is, without a doubt, one of the most important and miraculous feats that occurs throughout the breadth and width of the entire education system!!!   For this, Kindergarten teachers have my undying respect.  They are my educational superheroes, too.

So, my friend, take heart, your daughter couldn't be in better hands than she is with her Kindergarten teacher.  Cry, if so moved. You won't be the only one, I can assure you of that.  And, maybe, just maybe, you will get a phone call at home, too.  It wouldn't surprise me one bit.

I will close by offering up a poem that was written by Robert Fulghum called, All I Really Need To Know I've Learned in Kindergarten.   This poem is famous in educational circles and acts as a prayer for all of us who teach but, especially, those who teach first.  It goes a little like this:

All I really need to know about how to live and what to do and how to be I learned in kindergarten. Wisdom was not at the top of the graduate school mountain, but there in the sand pile at school.
These are the things I learned:
Everything you need to know is in there somewhere. The Golden Rule and love and basic sanitation. Ecology and politics and equality and sane living.
Take any one of those items and extrapolate it into sophisticated adult terms and apply it to your family life or your work or government or your world and it holds true and clear and firm. Think what a better world it would be if we all - the whole world - had cookies and milk at about 3 o'clock in the afternoon and then lay down with our blankies for a nap. Or if all governments had as a basic policy to always put things back where they found them and to clean up their own mess.


A Kindergarten classroom is the heartbeat of our entire system.  Do you have any memories or recollections of your first days of school OR your children's first experiences?  If so, please feel free to share those experiences in the comment box below.  As always, thanks for reading.  :)

PS:  I've been told that they always stay 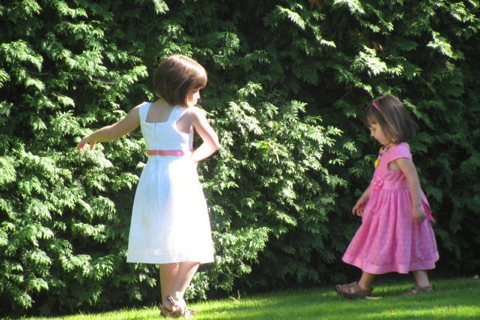 this young, right? :)
Posted by Thomas Charles MacInnes at 12:07 AM